How does West Virginia’s coal crisis fit into the global energy picture?

FAIRMONT — How does West Virginia’s coal crisis fit into the global energy picture? That was the topic of “A Global and Local Conversation on Coal” put on by the U.S. office of a German think tank, along with the West Virginia Sierra Club chapter and the West Virginia Community Development Hub on Tuesday.

Twenty people gathered in a room in the top floor of the NASA building for the conversation.

“Essentially, we’re trying to find a solution to how to save the climate,” said Rebecca Bertram, Energy and Environment program director for the Heinrich Boll Stiftung North America. Heinrich Boll is the official foundation of the German Green Party, she explained. Each of the five leading parties in Parliament has a government-funded foundation that serves as a think tank.

“West Virginia is not disconnected from what’s happening around the world,” she said.

The foundation recently released a publication titled “Coal Atlas,” subtitled “How We Are Cooking the Climate.” One of the atlas’ points is an agreement reached at a 2010 international climate change conference that the global temperature cannot afford to rise an additional 1.5 degrees C (34.7 degrees F) without devastating consequences. The conferees agreed to allow the global temperature to rise no more than 2 degrees C (35.6 degrees F) above pre-industrial levels.

To achieve that, she said, 88 percent of known coal reserves have to stay in the ground.

That doesn’t mean closing every mine and firing every miner now, or in the next five or 10 years, she said. It requires a thoughtful transition. Germany is struggling with that now. The country has already committed to ending nuclear power by 2022, so terminating another power source at the same time is problematic. Coal may be phased out by 2030 or 2040.

The U.S., and West Virginia, she said during the meeting and in a separate talk with The Dominion Post, has to decide its course. Do we transition to gas?” Do we rely on coal-hungry India to keep the coal industry alive? She recognizes that in the U.S., wind and solar are only supplemental, intermittent sources. A transition requires a complete restructuring of the system: Smart grids to balance the load, smart meters, smart infrastructure and energy efficiency programs to reduce demand.

“The great news is that it’s technically totally possible and it’s happening everywhere around the world at a speed that is just breathtaking,” she said. The utilities will resist, as they did in Germany. Energy prices could rise. And miners will need to be transitioned to new careers. The answer for miners may be generational — rely on natural attrition through retirement as younger workers are led into new areas. Conversation around the circle turned to coal companies. One reason coal is cheap, they said, is because companies don’t account for the external costs — on public health and the environment.

In West Virginia and across the world, communities on the front lines are ignored, said Bill Price, of the Sierra Club’s Beyond Coal to Clean Energy Campaign. India is building coal plants to bring its 300 million citizens without power into the 21st Century, but one community with a new power plant has no power. Several people said coal companies often treat people in the communities and their own workers as disposable. An example is a coal company that goes bankrupt and attempts to default on pensions but awards its executives millions in bonuses.

Daile Boulis, of Loudendale, talked about accidentally learning that a surface mine expansion would bring the mine to within 2,000 feet of her house and the others in her hollow. The permitting process didn’t consider how blasting would send rocks from the quarry at the edge of the hollow down onto the homes, how coal dust would cover the community, or any other issues. She fought, and her neighbors cheered her on, but few fought with her.

Amanda Workman, director of Community Engagement for the Development Hub, talked about how the Hub does that kind of work — it helps dying communities build their own vision for revitalization and helps them find the resources to come back to life.

While much talked focused on the coal companies as the bad guys, Bertram cautioned against taking that view. Coal companies and utilities have to be part of the conversation in how to move forward. “It’s not us against them.” That’s how Germany is moving forward, she said. Others pointed out that the U.S. is bigger and more diverse, and we might not see that kind of cooperation here.

This article was originally published in the Dominion Post.

The transition to a low-carbon energy system can only succeed if we switch to renewable energy and energy efficiency while parting from fossil fuels. Already, the global share of renewable energy in electricity production has increased sharply. Nevertheless, many new coal power plants, anticipated to run for many decades, were connected to the grid in recent years. How do these divergent trends add up?
By Arne Jungjohann 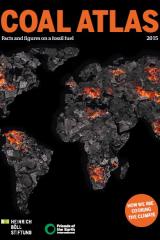 Coal Atlas: Facts and figures on a fossil fuel

Coal contributes more to climate change than any other energy source. It is therefore of utmost importance that the world finds ways by which to tame King Coal, especially as international climate negotiations get underway in Paris later this month. The Coal Atlas - a joint publication by the Heinrich Boell Foundation and Friends of the Earth International - highlights new facts and figures on the state of the global coal industry.