The year 2016, marking the 30th anniversary of the Chernobyl catastrophe and the 5th year since the Fukushima disaster started unfolding, strangely might go down in history as the period when the notion of risk of nuclear power plants turned into the perception of nuclear power plants at risk. Indeed, an increasing number of reactors is threatened by premature closure due to the unfavorable economic environment. Increasing operating and backfitting costs of aging power plants, decreasing bulk market prices and aggressive competitors. The development started out in the U.S., when in May 2013 Kewaunee was shut down although its operator, Dominion, had upgraded the plant and in February 2011 had obtained an operating license renewal valid until 2033. Two reactors at San Onofre followed, when replacement steam generators turned out faulty. Then Vermont Yankee shut down at the end of 2014. Early shutdown decisions have also hit Pilgrim and Fitzpatrick, likely to close before the end of 2017 and 2019. Utility Exelon, largest nuclear operator in the U.S., has announced on 2 June 2016 that it was retiring its Clinton (1065 MW) and Quad Cities (2 x 940 MW) nuclear facilities in 2017 as they have been losing money for several years. Only days later, PG&E in California announced that they would close the two Diablo Canyon units by 2025, replacing the capacity by energy efficiency and renewables, making the sixth largest economy in the world (having overtaken France in 2016) nuclear-free. Still in the same month of June 2016, the Omaha Public Power District (OPPD) Board voted unanimously to shut down the Fort Calhoun reactor by the end of the year—in the words on one board member, “simply an economic decision”. Nuclear Energy Institute President Marv Fertel stated in May 2016 that “if things don’t change, we have somewhere between 10 and 20 plants at risk”.

“Nuclear plants at risk”; the expression has become a common phrase in the news world, not only in the U.S. In Germany, the Grafenrheinfeld reactor was taken off the grid in 2015, six months earlier than required by law, because refueling was not worthwhile anymore. In Sweden, after two years of work and spending of several hundred million euros, upgrading was halted on Oskarshamn-2 in 2015 and the reactor was permanently closed. Oskarshamn-1 will follow in 2017 and Ringhals-1 and -2 will close in 2020 and 2019 respectively. Ringhals operator Vattenfall stated: “Sweden’s nuclear power industry is going through what is probably the most serious financial crisis since the first commercial reactors were brought into operation in the 1970s.” Even in Asia, nuclear plants are coming under economic pressure. The two Indian units Tarapur-1 and -2 are likely to be closed in the short term because they are not competitive under current market prices. “We are pouring in money into the reactors rather than making income from them”, Sekhar Basu, secretary at the Department of Atomic Energy stated.

In addition to the usual, global overview of status and trends in reactor building and operating, as well as the traditional comparison between deployment trend in the nuclear power and renewable energy sectors, the 2016 edition of the World Nuclear Industry Status Report (WNISR) provides an assessment of the trends of the economic health of some of the major players in the industry. Special chapters are devoted to the aftermath of the Chernobyl and Fukushima disasters. 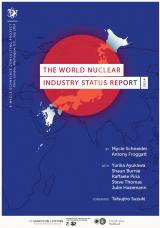 Three years after Fukushima, global nuclear power generation continues to decline. This year's report states that the nuclear share in the world's power generation declined steadily from a historic peak of 17.6 percent in 1996 to 10.8 percent in 2013. If it weren’t for the World Nuclear Industry Status Report, we probably wouldn’t know. This is because the nuclear industry is working hard to have us believe quite the opposite: that the world is seeing a nuclear renaissance.