The G7 and G20 in the global governance landscape

The Group of Seven (G7) and the Group of Twenty (G20) are informal governance clubs, which hold annual Summits of Heads of State to discuss issues of global importance.

The G7 is a more homogenous, intimate group, which has been meeting for decades. It is a subset – a club in the club - of the newer and more diverse G20, which represents the emerging multi-polar world order. (Another smaller club in the G20 club is the BRICS, an alliance of emerging economies: Brazil, Russia, India, China and South Africa.)

The agendas of the two clubs overlap, with the G7 generally engaging in more political and security-related issues than the G20, which primarily focuses on global economic and finance governance.

In 2017, the presidencies of the G7 and G20 Summits are held by Italy and Germany, respectively.

The following timeline juxtaposes the past and future G7 and G20 presidencies:

Whereas the EU, which comprises 28 countries, is a full member of the G20, it is only a participant in the G7.

After Britain’s decision to exit from the EU, questions about the future of the EU will be significant in the context of the Italian G7 presidency and the German G20 presidency in 2017.

This article is part of our dossier "G20 in Focus". 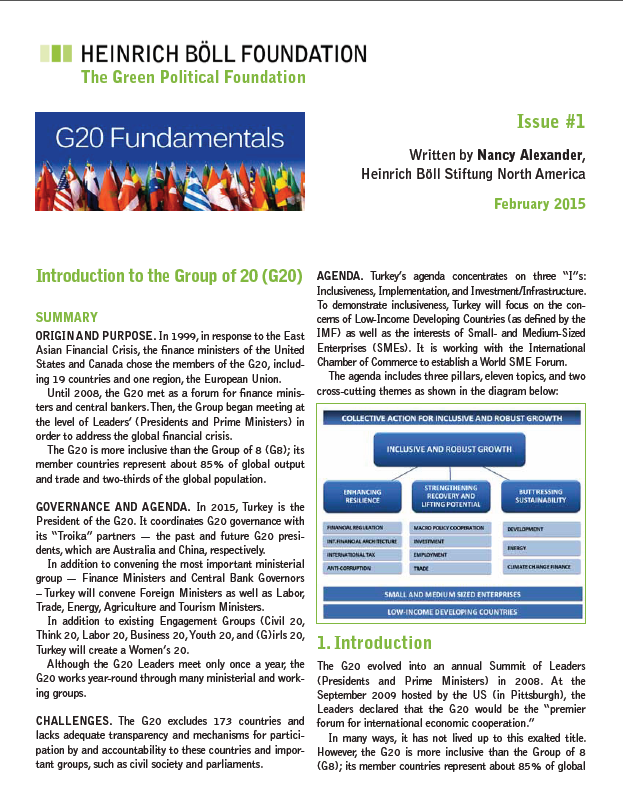 This paper provides background on the G20 and the upcoming Turkey G20 Summit, which will be held in Ankara in November 2015.