In Bonn & Beyond, Gender-Responsive Climate Finance Is More Than Numbers

When the international climate community comes together from November 6-17 for this year’s climate summit, the COP23 in Bonn, a lot of attention will be focused on the fact that this is the first COP presided over by a small island developing state, Fiji. Climate finance – what is delivered, who delivers it, how to increase the amounts mobilized and whether loss and damage already occurring in developing countries around the world can be addressed with financial support – will likely capture most of the public attention during two weeks of climate negotiations.

Much less of a spotlight in Bonn and beyond, however, will be on another set of climate finance relevant issues such as addressing what the normative framework should be for mobilizing, governing and disbursing climate finance in a way to ensure it addresses the needs and supports the rights of communities and people on the ground in developing countries and benefits women and men equally. What does such a normative framing and a push for the gender-responsiveness of climate finance mean for the global climate finance architecture and some key public actors, such as the Green Climate Fund? Some answers and recommendations to this set of interwoven questions are delivered by four new information briefs that ODI and the Heinrich Böll Stiftung North America have released as part of an annual update of their Climate Finance Fundamentals (CFF) briefing series on the eve of COP 23.

These briefings are available as PDFs here:

The issue of gender equality and women’s empowerment and its relation to climate efforts, in particular, remains one of the more hidden topics in the international climate process. This despite the fact that the gender dimension of climate change has for years been addressed as a standing item under the UNFCCC and some major advances in including gender considerations have been made since COP16 was held in Cancun in 2010, which had declared that gender equality and the effective participation of women are important for all aspects of climate change.  The Paris Agreement, which will shape climate implementation efforts from 2020 onward, also anchored gender equality and the empowerment of women as a core principle in its preamble. Yet, while mandating gender-responsive adaptation and capacity-building efforts – and thereby confirming the dominant narrative of women as climate change victims – the Paris Agreement failed to integrate gender-specific language in its mitigation, technology or finance articles, and thus neglected to prominently acknowledge and support the role of women as key agents in addressing climate change without whom the implementation of the Paris Agreement is bound to come up short. Hidden on the agenda of COP23 under ‘gender and climate change, for which women and gender advocates active in the negotiations have elaborated key demands, is one possible outcome of the COP23 talks in Bonn that could contribute to significantly change this. Parties are considering for the first time a time-bound Gender Action Plan (GAP) for the UNFCCC, which would designate key actions and indicators for progress in gender mainstreaming the international climate process and related climate actions. An important focus of this GAP is intended to be on means of implementation, especially technology development and transfer as well as finance, as key sectors to achieve this goal.  Any UNFCCC GAP, however, will only be successful if there are dedicated resources for its implementation. This is far from secured as the UNFCCC Secretariat has to rely on voluntary contributions by Parties for these efforts, and thus likely will come up short of what is needed.

Astonishingly, given the apparent difficulty in the UNFCCC negotiations to consider gender dimensions adequately in the climate finance negotiations, the UNFCCC’s Financial Mechanism is ahead of the Convention, so much so that some observers have called it a case of ‘the tail wagging the dog’.  The Financial Mechanism’s two operating entities, the Global Environment Facility (GEF) and the Green Climate Fund (GCF) – which will also serve in the same function for the Paris Agreement – both have dedicated gender policies and separate gender action plans.  Efforts to integrate gender in the GEF date back to 2011 when a gender mainstreaming policy was adopted and were tied to the 6th replenishment period (FY15-18), which saw the elaboration of the GEF’s Gender Equality Action Plan. And the GCF as the new kid on the public climate finance block even started out with a mandate to integrate gender prominently anchored in its governing instrument, making clear from the beginning and before the first money was disbursed that gender considerations would affect all GCF funding decisions, irrespective of whether they support mitigation or adaptation. This made the GCF the first climate fund in the global finance architecture to integrate a gender dimension from the outset by anchoring gender mandates in key operational policies governing accreditation of implementation partners, the investment criteria determining which proposals would come up for Board consideration, or their performance measurement. This happened before the GCF’s own gender policy and action plan – currently under review – were approved in March 2015 and before the GCF Board considered the first funding proposals in October 2015, just weeks before Paris. The Kyoto Protocol Adaptation Fund – which is aiming to serve as operating entity for the Paris Agreement – likewise approved a gender policy and a multi-year gender action in 2016 and now prominently highlights support of gender equality as part of its new medium-term strategy (2018-2022).

Outside of the UNFCCC, the Climate Investment Funds (CIFs) have worked over the years to improve the CIF’s operations in terms of gender-responsiveness and increase their accountability for gender outcomes, since a first CIF gender review in 2013 found significant shortcomings in their consideration of gender, especially in the mitigation-focused Clean Technology Fund (CTF). A new CIF gender policy and an action plan in its second phase serve this purpose

All this is not to say that there would not be room for significant improvement in gender integration in existing climate funds: A 2017 GEF gender mainstreaming evaluation shows that the majority of its climate change project and program proposals remain gender-blind or largely gender-unaware.  And in the GCF, where a mandatory gender and social impact assessment is required for every proposal and should be ideally accompanied by a project-specific gender action plan, not all project proponents submit analysis and plans that reflect a thorough think-through or provide a budget integrating sufficient financial and human resources for a gender-responsive implementation. The GCF Board in approving a rewrite of the gender policy and action plan should follow the example of the Adaptation Fund Board which has shown a willingness to send funding proposals back to its implementation partners if gender is not adequately considered.  Making such meaningful gender integration a condition of project approval in the GCF – and other climate funds – will ultimately not only change the way funding decisions are made and implemented, but will fundamentally alter the focus of its funding operations. This is a surefire way to ensure that climate financing is guided by a normative set of principles in a way that is fair and equitable and puts the equal rights of men and women as empowered climate actors and beneficiary at its center.

The 23rd meeting of the Conference of the Parties (COP 23) of the United Nations Framework Convention on Climate Change will convene from 6 to 17 November in Bonn, Germany.  This article provides a short overview of key issues at stake and a summary of our expectations for COP 23. 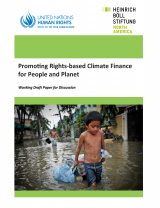 This draft report sets out the key human rights risks associated with climate finance, the human rights responsibilities of State and private actors in the mobilization and administration of funding and the governance of funds and the current international architecture for climate finance.