Is the Eastern Partnership still relevant?

With the European Partnership Summit coming up on November 24th, the question of the partnership's relevance still remains.

What is the Eastern Partnership?

From the US perspective, the European Union’s Eastern neighbors are specifically interesting for two reasons: Their proximity to Russia and their potential to be incorporated into NATO. As it is located in its direct neighborhood, the EU has to pay closer attention to the internal developments in these countries, and emphasizes strengthening democracies and the rule of law.

Under the head of the European Neighborhood Policy, the EU set up the Eastern Partnership (EaP) in 2008. While the primary purpose is to further economic, political, and social ties between the EU and Armenia, Azerbaijan, Georgia, the Republic of Moldova, Ukraine, and Belarus, some of the partnership countries hope that the program will eventually lead to EU membership. The EaP’s focus in the early years was on energy and security, with the EU backing projects such as energy integration and border protection; in recent years it has shifted to civil society and people-to-people involvement. The Eastern Partnership holds a summit bi-annually, and the next one will take place on November 24, 2017, in Brussels. The official goals of this years’ summit are stronger connectivity, governance, economy, and society, with 20 more concrete goals set to be accomplished by 2020.

However, EU interest in the region has declined in recent years, as reform in the partnership countries is halting and internal conflicts diverted its attention away from the Eastern Partnership. Does this mean that the European Partnership has become obsolete?

There is a clear difference in the how the countries Georgia, Ukraine, and the Republic of Moldova have progressed in their relationship with the EU, and how the countries Azerbaijan, Armenia, and Belarus have become more and more disinterested in the process.

Georgia, Ukraine, and Moldova have all signed Association Agreements and Deep and Comprehensive Free Trade Agreements (AA/DCFTA) with the EU. But perhaps the most notable achievement of the EaP is visa liberalizations, which allow citizens of Georgia, Moldova and Ukraine to travel to the Schengen Area without visas for 90 days.

The importance of this accomplishment should not be underestimated. A goal initially announced in the first summit in 2009, these visa liberations shows the EU’s commitment to the partnership and its attempt to address the interests of the citizens in the EaP partner countries. As a result of this process, direct flights from Moldova to Europe increased by 75 percent, and Georgia hosted 6.3 million tourists in 2016, a large number for a country of 3.7 million people. Ukraine, Georgia, and Moldova are interested in furthering relations with the EU and released a joint position paper reaffirming their commitment to EU integration ahead of the 2017 summit.

All six EaP partner countries have to balance internal disputes about whether to move towards the EU or towards Russia, which still holds enormous influence over the former Soviet countries. However, the countries are handling this dilemma differently. The countries that look towards Russia, mainly Armenia, Azerbaijan, and Belarus receive less EU assistance.

Pavel Filip, Prime Minister of Moldova, has stated again and again that Moldova’s place is in the West, even wanting to inscribe the country’s pro-European direction in the constitution. However, this is often just rhetoric. Other powerful actors, like the country’s president Igor Dodon, are even outspokenly pro-Russian.

Azerbaijan, Armenia and Belarus have all turned away from the EU in a more definite way. Belarus and Armenia are member states of the Russian-led counterpart to the EaP, the Eurasian Economic Union (EEU). Armenia’s decision to join the EEU took an Association Agreement with the EU off the table in 2013. Belarus also oftentimes leans towards Russia in a careful balancing act between the two powers. This year, it even went as far as to let Russia’s Zapad, a quadrennial military exercise and war games, take place in the country, which made both the EU and NATO states nervous.

The Eastern Partnership shows the impact a deep commitment to the EU makes. Ukraine, Moldova, and Georgia, the countries closest to the EU, are also the ones with the biggest will to reform, even though the implementation might be slow.

However, the EU is not ready to make a promise of membership to these countries. As a point of contentious debate within the Member States, the EU released an Aspirations Agreement, a statement reaffirming that they were not promising membership to the partnership countries, six weeks ahead of the summit.

There is significant division within the European Union on the topic of Eastern Expansion. In the Netherlands and Germany, for example, many voters and policy makers are against expanding the EU to the East. On the other side, in Central and Eastern European Member States there is generally greater interest in EU accession talks. The Visegrad Group, which includes Poland, the Czech Republic, Slovakia, and Hungary, has publically supported further EU cooperation with the EaP countries in the past. However, recent internal EU issues like the refugee crisis and the European debt crisis have exasperated divisions to the point that the issue of eastward expansion is currently not on the top of any EU Member States’ agenda.

Critics of Eastern expansion point out that even in Ukraine, Georgia, and Moldova, the most reformed countries in the region, challenges are plentiful and reform is slow. Corruption is a big problem that all six countries face. Ukraine ranked 131 on the Corruption Index 2016. The biggest roadblocks ahead include not just corruption, but also Russian influence and Russian-leaning parties in EaP countries, the pre-dominance of powerful oligarchs, and social issues, in particular minority rights and gender inequality.

Considering the lack of real reform, accession to the EU seems unlikely for the next decade for members of the EaP. But without this “light at the end of the tunnel,” as Tamar Khulordava of the Georgian parliament puts it, reforms are bound never to happen. Even if no clear answers are developed on Friday, there is still a chance to refocus the Eastern Partnership. For this, the EU should consider that reform implementation in the EaP countries will take longer than expected. The region historically has stronger ties to Eurasia and Russia, and this cannot be erased overnight. Tying the EU’s incentives to radical reform could cause the EaP countries to turn further away from the EU. Further, the EU should listen less to pro-EU rhetoric from the EaP countries and look more for actual willingness to reform. In the end, it is up to the countries themselves what direction they want to take, but the EU should incentivize any kind of positive change through setting realistic expectations.

The summit is an opportunity to rethink the Eastern Partnership. Despite all the criticism to the EaP, the policies have had some positive impact on the region. From visa free travel to increased cooperation with the EU in different areas, the EaP region has benefitted in many ways from the partnership. For these reasons and more, the Eastern Partnership should not be discarded as a failed enterprise all together, but instead be reformed to meet the growing wants and needs of the region.

Eastern Partnership Summit in Riga: No bark or bite by EU leaders

The Eastern Partnership summit in Riga has been tagged by the hosting Latvian minister of foreign affairs a “survival summit”. This implied that EU leaders might propose decisive actions to intensify relations with the Eastern Partnership countries in light of the Ukraine crisis. But to the disappointment of some of the Eastern European and South Caucasus countries, this did not happen.
By Dominik Tolksdorf 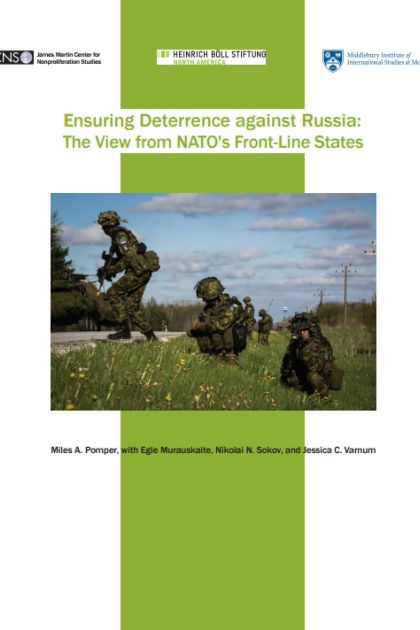 Ensuring Deterrence against Russia: The View from NATO's Front-Line States

Last week NATO announced its plan to deploy troops to six NATO members in Central Europe to strengthen collective defense. Security guarantees for the front-line states have been discussed since Russia’s intervention in Crimea. This publication from the James Martin Center for Nonproliferation Studies analyzes the perceptions of governmental and nongovernmental experts in six NATO front-line states.
pdf

We would all love to have a democratic Russia as a partner in the European Union. However, the country’s current political leadership is moving away from Europe.