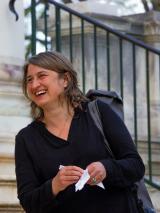 Theater director Christine Umpfenbach worked with students in the drama and playwriting classes of Professors Katelyn Hale Wood and Doug Grissom. She presented students with her own theater projects, which tell the stories of guest workers and victims of right-wing violence in Germany. Building on a long tradtion in German theater, Umpfenbach employs the method of documentary theater, drawing on interviews with historical witnesses, primary research, and non-traditional actors (so-called “experts of the everyday”) to create her works.

Inspired by her work, the students researched, wrote and performed their own piece of documentary theater, which addressed histories of marginalization at the University. The resulting piece, Document It!, was performed on April 16, 2019.

The students’ piece requires active audience participation, pulling attendees into the show and challenging them to personally engage with the material. It began by asking the audience to move between signs stating “YES” and “NO” in response to questions asked by the performers, such as “are you a student at UVa?” and “have you experienced discrimination at UVa?”

Each scene focused on a different topic. One discussed the black bus stop, a former stop on the Charlottesville bus lines that had played a central role in African-American life at the university and was destroyed when the station stopped being serviced. Another scene explored the university’s response to the 2017 the Unite the Right rally. Other topics included the controversy surrounding the disproven 2014 Rolling Stone article alleging a gang rape on campus, alongside persistent issues of sexual violence on campus.

Some students involved in Document It! agreed to be interviewed about their experience. You can listen to them here:

You can view a collection of images related to the production here.