The Green Climate Fund (GCF), established by and accountable to the United Nations Framework Convention on Climate Change (UNFCCC), is the world’s largest multilateral climate fund. A core part of its remit is to encourage private sector investment in mitigation and adaptation measures that address climate change in developing countries. The GCF has arguably probably the strongest private sector focus of the multilateral climate funds and this is seen by many countries, including several developed country contributors, as a core feature that differentiates it from other public actors in the global climate finance architecture.

GCF private financing should be “consistent with a country-driven approach,” with a particular focus on “local actors, including small- and medium-sized enterprises and local financial intermediaries” as detailed in the GCF’s Governing Instrument. On paper, the GCF can accept considerable investment risks in order to achieve impact and innovation, while maintaining rigorous fiscal standards, environmental and social safeguards. However, various evaluations by the GCF's Independent Evaluation Unit have identified shortcomings in policies and practices that have so far prevented the GCF from achieving this goal. 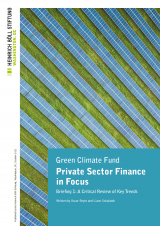 This analysis critically reviews the status quo of private sector support in the GCF several years into the Fund’s full operationalization finding that the dividing line between “private” and “public” GCF finance often remains unclear. This review by civil society observers to the GCF comes at a time when the effectiveness and future of the GCF’s existing private sector engagement strategy are under internal review. 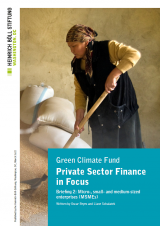 This paper analysis whether the GCF’s Private Sector Facility (PSF) is falling substantively short of meeting its mandate to support micro-, small- and medium-sized enterprises (MSMEs). It finds that while the GCF does not issue portfolio-wide data on MSME support, almost a third of its funded activities offer at least some support to MSMEs. However most of those are classified as public sector projects and programs.