As part of Prof. Zvi Gilboa’s class on identity and migration, visiting fellow Noa Ha discussed the history of activism and political organizing in immigrant and minority communities in Germany. Drawing on her background in architecture and the sociology of urban space, she worked with students to identify built spaces on the UVa campus and in the city of Charlottesville that embody hidden histories of marginalized communities.

Students conducted research and created posters for a public presentation. Some analyzed how a local monument to Lewis & Clark had for many years failed to name the Sacagawea figure at the men’s feet, and explored broader issues of representation for local indigenous communities forced from their land.  Others examined the University campus, a UNESCO heritage site, from an engineering perspective: they described how Jefferson’s famously high, serpentine walls were designed to hide the sight and sound of enslaved laborers from the white students and faculty.

Students also investigated the history of the city’s once vibrant African-American neighborhood in Vinegar Hill, which was razed under the guise of urban renewal in order to better connect a white neighborhood with the UVa campus.

A final group visited burial sites of enslaved African Americans on the UVa campus, which remain largely unmarked and unseen to this day. 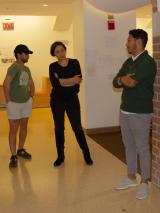 We spoke with two students in the course, Jessica Wang and Kayla McCampbell, about what they learned during the Transatlantic Partnership on Memory & Responsibility and about issues of visibility at the University of Virginia and in Charlottesville more broadly. You can listen to both of them here:

Click here for photos of the students presenting their posters.