Fellow Armin Langer visited Professor Manuela Achilles’ course on the history of Nazi Germany. He shared stories from his own activist project, the Bus of Encounters, in which he and a diverse group of friends traveled to rural and conservative parts of Germany to talk politics. He and the other activists had sought to better understand why people in this area often supported the far-right, anti-immigrant Alternative for Germany Party, while also giving locals the opportunity to talk to Germans of very different backgrounds.

At UVa, Langer challenged the students of the Nazi Germany course to develop their own ideas for a democratic, activist intervention. Students talked about locations on campus and in Charlottesville where their action could shed light on the uncomfortable history of slavery or racism at the university, and where they could engage people in conversation. 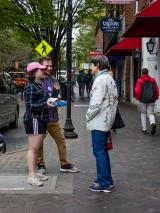