Sowing the seeds of an equitable world

The reclamation of seed as a common good has begun. Following the concept of open source, new approaches evolve that result in the cultivation of a large number of species and varieties.

We witness an enormous concentration of economic power not only but especially on the market for seed. Only seven companies control 70 percent of the world market for seed and the trend towards monopolisation seems to continue unabated. The giant US corporations DuPont and Dow Chemical are about to merge, ChemChina is buying Syngenta of Switzerland, and Bayer intends to merge with Monsanto. Since the 1990s, Monsanto has systematically incorporated markets for commercial seed around the world and today it owns the patents to the majority of genetically modified crops.

In addition to a stifling economic dominance, there are also technical means such as the cultivation of hybrids (preventing farmers from growing their own seed) as well as legal avenues that are dominated by a select few. The latter are used to defend property rights by patenting certain qualities of newly developed crop varieties. There are fewer and fewer independent cultivation programmes, and thus major corporations that dictate what varieties of crop may be grown trap farmers all over the world.

Now the Opensource Seeds activists of Agrecol have taken up the fight of David versus Goliath and are offering a way out of the trap. Agrecol’s project is a very practical alternative to a globally patented market for seeds where all the odds are stacked against the farmers. Although the small yellow cocktail tomato Sunviva will not go on to dominate the world market for tomatoes, it is proof that there is an alternative to centrally controlled, patented seed. It is one thing to call for new approaches –to actually develop alternatives is another matter. Sunviva is one of them, reviving an age-old principle, namely, that seed is the common property of all people.

While Sunviva is registered, everyone may use it free of charge, as well as pass it on to others or even improve it – the only condition being that it must not be patented. By owning a packet of Sunviva seeds, I am entering into a license agreement that is free of charge, but comes with certain Terms and Conditions. I may use the seed, but cannot apply for breeders' rights or patents on it. This means that others enjoy the same rights to the seed as I do – an enormous potential.

The Sunviva project has revolutionary qualities, using open source principles taken from the digital world in order to reappropriate seed and make it a common good once again. The project gives farmers their freedom and independence back – and it makes our stock of seed more diverse. This is something the Heinrich Böll Foundation has been promoting for years – diversity instead of monocultures and an environmentally friendly agricultural model based on the reappropriation of the commons.

The seeds we use decide what we eat and how diverse our food is. Access to seed is more important than ever and the cultivation of a great number of unpatented species and varieties is crucial for fighting the loss of biodiversity. Soil erosion and climate change demand a departure from our current agricultural model, instead adopting a sustainable model that is applied locally, with respect for local circumstances and empowers people and farmers by being decentralised. This is the opposite of what we have today, namely, uniform fields planted with very few varieties of crops that form the basis of our nutrition. This form of farming may be very profitable. In light of the challenges presented by climate change it is irresponsible and will impose a heavy burden on future generations.

So, how can a model project become mainstream?

Commons require protection too, especially as long as other intellectual property rights still exist, be it on the national level or through international organisations such as the WTO. Utopia would be to abolish all intellectual property rights, as they form the basis of inequitable power relations and monocultures. Then open source licenses would become redundant, too. Until then seeds like Sunviva need legal protection from individuals turning them into private property yet again.

The propagation of seed should not be exclusive to corporations. For a long time we have known that agricultural biodiversity is threatened by the aberration, that is industrial-scale farming. Yet although this also presents a threat to food security there is hardly any public funding for the breeding of resilient seed varieties. The development of environmentally friendly varieties needs to become a major public responsibility. We can bring about change by organising political majorities in national parliaments and on the European and international level.

The work of pioneers like Agrecol can only be a first step. In order to succeed, they will need wide political and social support. We at the Heinrich Böll Foundation regard it as one of our tasks to raise awareness about the fact that today, more than ever, our food security is dependent on a few corporations.

This article was first published in German in: 'politische ökologie' (Nr. 150) "Geht doch! Geschichten, die zum Wandel anstiften." It can be downloaded here. 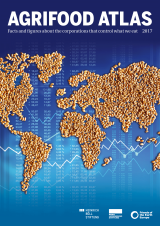 Agrifood corporations are driving industrialization along the entire global value chain, from farm to plate. The Agrifood Atlas serves facts and shows why and how the road to a socio-ecologically oriented agricultural and nutritional industry must be taken.