Timor-Leste is a sovereign nation with a rich history and local knowledge that endured through 400 years of Portuguese colonization, 24 years of Indonesian occupation and a transitional period under the administration of the United Nations from 1999 to 2002. To local people in rural areas, Indigenous practices inherited by the ancestors offer vital knowledge allowing them to connect with nature and to make best use of the surrounding natural resources. Due to the history of colonization and the suffering that people had endured, which finally led to its independence, Timor-Leste is considered rai lulik (sacred land) by its people.

The term rai lulik (sacred land) is commonly used by local people when referring to Timor-Leste as a nation. Long before the arrival of the first Portuguese Dominican priests in mid 16th century (the emergence of religious beliefs), the culture of the people of Timor-Leste (Timorese) was largely based on animistic belief - the beliefs in the sky and its components, sea, earth and natural resources including their inhabitants. It is indeed believed by the Timorese people that all the living things have their own guardian (nain in local terms) – be it wells, land, mountains, stones, animals, and so on.

One must always greet nature as a way to show respect when visiting for the first time to ask for permission from the spiritual guardian (nain) before getting access to any particular places or areas such as wells/springs, mountains, land, sea, forest, and so on. Even before building a house in an area, there is a need to perform rituals before sourcing the materials. Additionally, in rural villages, there are certain trees and ponds, wells or springs that are considered sacred – it is strongly believed that a ritual must be held each year (such as a offering of a sheep’s or cow’s head) for the trees and waters to run in order to sustain the community’s need and the connection they have with nature. Moreover, during mid-day people are prohibited to use or fetch water from the sacred spring as it may lead to a disaster because this spring is believed to have its own nain (protector). 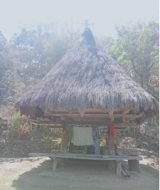 In Timor-Leste, each clan in the community has its own traditional or sacred house (called uma lisan/lulik) headed by lia nain (traditional elders) to value the traditions inherited from their ancestors. The traditions upheld by each uma lisan/lulik also varies – the lianain of Makasae speaking community (particularly in Macalaco village, Quelicai Aministrative-Post, Baucau Municipality) normally would perform a ritual called sau-batar/sau-hare (after the harvesting of corn and rice) before the members of each clan could feast on the harvested goods. Moreover, there are also different kinds of foods or drinks that are considered lulik (prohibited) from being consumed by each member of the clan.

There are also rituals done before constructing uma lisan/lulik called ate-rei/ate-maa-wadere (the supply wood materials used for construction). The materials used must be sourced naturally such as mostly palm trees, bamboo and other natural materials, which also involves performing rituals prior to acquiring the materials needed by asking permission from the nain (protector).

Tais is traditional hand-woven fabrics worn during formal events, traditional weddings, on the occasion of traditional rituals or offerings and so on. Tais weaving is a local knowledge in producing clothing inherited from the ancestors – each municipality has distinctive designs and motifs. Other traditional goods are handmade from palm tree fronds and coconut shell.

Before religious beliefs started to emerge and spread in the island of Timor through the introduction of Catholicism, the rural community of Makasae regarded Uru-Watu (which means the Sun and the Moon) as their God. The animistic beliefs inherited by the ancestors are the root of the connection that local people have with each other and the relationship that local people have with nature and its inhabitants. The local knowledge inherited from the predecessors plays an important role in the decision-making processes of local people on a daily basis – be it about environmental conservation, hunting for food, upholding traditions, and so on.

The effort of local people in conserving the environment is through a customary law called Tara Bandu or “the hanging of culturally significant items from a wooden shaft to place a ban on certain agricultural or social activities within a given area to serve as effective means of dispute resolution”  (Belun-Asia Foundation, 2013). Tara Bandu is widely practiced throughout the country with various kinds of rituals to be performed and different mandatory penalty rules and sanctions set, depending on the traditions of that particular region.

In Defawasi, Baguia (Baucau Municipality), the local people enforce Tara Bandu as a way to traditionally conserve the environment and nature. Sabara Makalia (a person appointed as a guard) is the person responsible to administer the Tara Bandu in the area – for both publicly and privately owned land. There is a need to perform rituals before cutting down trees within the restricted areas.

These are only some of the local knowledge of Timorese people (from the Makasae speaking community) – there are more examples of local knowledge practiced daily by local people that would warrant further in-depth research in the future.

Indigenous knowledge is sustained by local Timorese in order to survive given the current global climate conditions, which are unprecedented in history. Modern mitigation and adaptation efforts using local knowledge are based on practices that have been passed down verbally from generation to generation over the centuries by our ancestors. These modern measures draw on practices or methodologies adopted by local Timorese people in conserving the environment and adapting to changing climate patterns which influence agricultural conditions. In Timor-Leste, local customary law, Tara Bandu, is incorporated into national policies in order to support the effort to conserve biodiversity. Additionally, Mother Nature is regarded with high respect by local people, who have a protocol of greeting nature to request permission to access to wells or springs, mountains, land, sea or forests. This is done out of respect for the spiritual guardian (nain) when visiting a place for the first time.

After learning about some of the existing ancestral knowledge and the close relationship that our ancestors had with nature, it is clear that the practices and traditions of local people deserve a platform and need to be listened to in high level discussions about climate change. There is a need to connect the dots and learn from other countries about their own experiences and practices with their ancestral knowledge and how it influences modern adaptation and mitigation practices as well as measures to address loss and damage. Such engagement will also serve as an awakening for those individuals who so far lack understanding regarding local knowledge within their countries and communities and provide them with an opportunity to dig beneath the surface to find out more about local knowledge and practices as they differ from one area to the other.

It is imperative for all of us to reacquaint ourselves with our roots and uphold practices, traditions and relationships that our ancestors had with the environment that we live in –only then can we discover more and better ways to protect our Mother Earth.