Dossier
In this dossier, four experts examine the status of Turkey’s relations with the US and the EU and fields of cooperation and conflict from different perspectives. 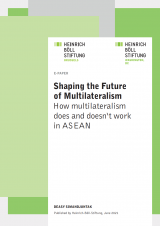 Populism, nationalism, and an intensifying rivalry between the United States and China are testing the cooperation within the Association of Southeast Asian Nations (ASEAN). As its 10 member States battle the effects of Covid-19 amid political and territorial crises, the group has struggled to overcome internal differences and address profound external challenges.

Flashpoints in U.S.-Turkey Relations in 2021

Study
Turkey’s pursuit of strategic autonomy should be met with firm transactionalism by the Biden administration, and while this stance is unlikely to change President Erdoğan’s unilateral approach, it could help preserve certain institutional ties.
By Max Hoffman

War in Syria: The horror of Idlib

Comment
The recent escalation of violence in Idlib is also a result of the increasing tensions between Turkey and Russia. The victims are those in Idlib, caught up in a hopeless situation amid a huge spectrum of differing interests.
By Bente Scheller

In the run up to the 20th anniversary of the United Nations Security Council Resolution 1325 (UNSCR 1325 (2000)) Women In International Security (WIIS) and the Heinrich-Böll-Stiftung Washington, DC are launching the international graduate student essay competition 1325AndBeyond. 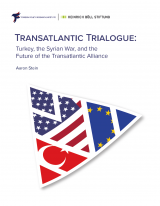 Analysis
On October 21, Canada will head to the polls. Four years ago, Liberal Justin Trudeau was elected prime minister on the back of a cultivated progressive persona and commitments to match. Seen from Europe, Canada under Trudeau became a key partner in a global context characterised by a turn away from the rules-based international order. With Canada’s political future in the balance, Dominik Tolksdorf and Xandie Kuenning ask whether Trudeau’s record in government stands up to scrutiny and look to where Canada might be heading in the years to come.
By Dominik Tolksdorf and Xandie Kuenning

Transatlantic Media Fellowship
The US has stopped funding Palestinian security. Will Europe step in to fill the gap?
By Neri Zilber

Transatlantic Media Fellowship
The U.S. president drew a red line when 24 Ukrainians were seized last year. Now his sit-down with the Russian president is back on.
By Amy Mackinnon

In Georgia’s Parliament, One Russian Too Many

Transatlantic Media Fellowship
Following violent unrest, the speaker of the Georgian Parliament steps down after a Russian lawmaker sat in his chair.
By Amy Mackinnon