After a round of strong applications, we are excited to announce our selection of Transatlantic Media Fellows for 2019.

Each year, we sponsor a select number of journalists from the US and Europe for an independent, five-day, transatlantic trip to research stories relevant to our work on technology and digital policy (new in 2019!), climate and energy policy, democracy and social policy, or foreign and security policy. Fellowships are selected annually and are open to journalists in any medium.

Isaac Stone Fish is a Washington Post Global Opinions contributing columnist, an on-air contributor to CBSN, a senior fellow at the Asia Society's Center on U.S.-China Relations in New York City, and a visiting fellow at the German Marshall Fund. Previously he served as Foreign Policy Magazine's Asia Editor where he managed coverage of the region, and wrote about the politics, economics, and international affairs of China, Japan, and the Koreas. Formerly a Beijing correspondent for Newsweek, Stone Fish spent seven years living in China prior to joining Foreign Policy. He has traveled widely in the region and in the country, visiting every Chinese province, autonomous region, and municipality. He is currently writing a book about China's influence in America.

During his fellowship, Isaac plans to report on China's growing influence in Europe.

Felix Franz works as a freelance journalist in Berlin. His most recent work includes covering the Armenian revolution for Deutsche Welle and the Christian Science Monitor; a documentary about the Binge Eating Disorder for Germany's public broadcaster as well as regular contributions as a TV producer and reporter for BBC News. He speaks Spanish, French and Portuguese and publishes in English and German.

During his fellowship, Felix will travel to San Francisco and the Bay Area to study how the local population is affected by skyrocketing housing prices in the vicinity of Silicon Valley. 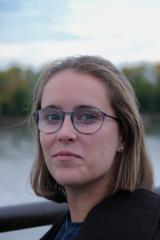 Jenna McLaughlin is a national security and investigations reporter for Yahoo News, where she focuses on the intelligence community, foreign policy, and other issues. McLaughlin previously covered intelligence and national security for CNN, Foreign Policy Magazine, The Intercept, and Mother Jones Magazine, following her graduation from Johns Hopkins University in 2014.

For the Transatlantic Media Fellowship, McLaughlin will be traveling to Estonia and other nearby small European nations to investigate the role of offensive, defensive, and intelligence related cyber activities particularly in confronting Russian aggression and hybrid warfare—as well as the value of those skills to allies in the United States. McLaughlin will also be diving into European election security, Chinese influence in Europe, opinions of United States' leadership heading into the 2020 U.S. presidential election, and the broader role of technology in the region. 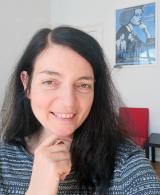 Christine Daum-Farber works as a TV journalist, filmmaker and cinematographer, most notably for nano/3sat, aspekte/ZDF, and Kulturzeit/3sat. Since 1994, she has traveled the world, producing more than 300 pieces for culture and science shows. Born in East Berlin, she left the GDR because of her political engagement two years before the fall of the Wall. She holds a Magistra Artium from the Free University of Berlin for Theater and Film Studies, Philosophy, and Psychology. Additionally, she has trained as a television journalist and participated in the prestigious Documentary Campus. As a writer and experimental filmmaker, she received several grants from the Berlin Senate. Ms. Daum-Farber was awared the "Medienpreis Entwicklungspolitik" by the Federal Ministry for Development Policy, and was jointly nominated with her co-producer Nelson Farber for "LiteraVision 2014" for the best literature piece on German TV.

Saul Elbein is an independent journalist who covers land, resources, and energy. He lives in Atlanta, Georgia.

Saul Elbein will use his fellowship to investigate the connections between forestry policy and climate populism in Portugal, Britain, and Estonia.

Based in Raleigh, North Carolina, Elizabeth Ouzts reports on the state's clean energy transition for the Energy News Network—covering everything from the battle over interstate pipelines to North Carolina's rapid deployment of solar energy. For Environmental Health News, she's written several features on the state's hog industry and its pursuit of renewable natural gas. A former director of communications for the nonprofit Environment America, Elizabeth brings nearly two decades of experience in environmental and energy policy to her reporting.

North Carolina is poised to become the nation's largest producer of exported wood pellets, the popular coal substitute that's come under increasing scrutiny for making the climate crisis worse, not better. Elizabeth will use her fellowship to examine the other end of the pellet trade: the biomass plants in Europe that have driven pellet manufacturing in her home state, the policy makers that helped make those biomass plants economically viable, and the efforts to reform guidance that deems wood-derived energy as carbon neutral.

Sarah Shemkus is a freelance journalist based outside of Boston. She covers business, food, sustainability, and the places where these topics intersect. She is fascinated by how a society expresses its values through what its members buy, drive, and eat. As a reporter for the Energy News Network she covers energy policy issues in Massachusetts, examining issues related to the state's transition to clean energy. Her work has appeared in The Boston Globe, The Washington Post, Good, The Guardian, Slate, TheAtlantic.com, Salon, and many other publications.

Sarah will use her fellowship to travel to Norway and report on the country's efforts to reduce carbon emissions from transportation and the built environment. Her stories will examine how Norway's successes and challenges can inform Massachusetts' plans to achieve the same goals.

Katherin Webb-Hehn is a freelance journalist and mother in Birmingham, Alabama. By examining justice in the American South, she hopes to reframe national and international narrative structures in media that perpetuate myths about the folks who call this region home. Her work has appeared in numerous literary magazines and news outlets, including the New York Times, Bitter Southerner, Longreads, PANK, the Nation, In These Times, The Progressive, Audobon Magazine, Southerly, Scalawag, and more. She's also the recipient of a Marguerite Casy Foundation Journalism Fellowship.

Emma Copley Eisenberg is a writer based in Philadelphia where she co-directs Blue Stoop, a hub for the literary arts. Her work has appeared in Granta, The Virgin Quarterly Review, Tin House, Guernica, The New Republic, Salon, Slate, McSweeney's, the Paris Review online and others and received recognition from the GLAAD Media Awards, the Deadline Awards, the New York Association of Black Journalists as well as been named to Longreads' list of Best Crime Reporting 2017. She is the recipient of fellowships and residencies from the Elizabeth George Foundation, the Millay Colony for the Arts, Lambda Literary, and the Carey Institute for the Global Good. Her first book of narrative nonfiction, THE THIRD RAINBOW GIRL: The Long Life of a Double Murder in Appalachia, is forthcoming from Hachette Books in January 2020.

Emma will use the Transatlantic Media Fellowship to investigate the complex legacy of The Troubles in relation to contemporary queer identity and the fight for gay marriage in Northern Ireland.

Hanna Kozlowska is a reporter based in New York. She is a staff writer for Quartz covering social media and technology, but has also focused on criminal justice, politics, and human rights. She has previously worked for The New York Times and Foreign Policy magazine, and reported from Poland and Ukraine.

Hanna will use her fellowship to travel to Poland to report on the economic, political and societal implications of Ukrainian immigration to the country.

Clark Randall is an award winning investigative journalist based in St. Louis, Missouri. Staying in the city, he graduated with a degree in African & African American Studies from Washington University in St. Louis. He studies low-income housing policy and the historical processes of segregation and suburbanization. Recently, Clark has written extensively on large landowners in the region, and the politics and funding mechanisms of the Section-8, Housing Choice Voucher program.

Clark will use his fellowship to travel to Berlin, and report on the parallels and discrepancies of the struggles for fair housing between there and St. Louis.

Alexandra Tempus writes about how climate change influences where and how we live. She was named a 2016-17 Climate and Environmental Justice Literary Fellow by migrant rights organization CultureStrike and a 2018 Climate Solutions Fellow by the New Economies Reporting Project. Her work has appeared in Orion, The Progressive, The Nation, VICE News and elsewhere. She is associate editor at The Progressive.

Alexandra will use her fellowship to report on the study of climate-driven migration at the Hugo Observatory in Liege, Belgium, and to seek stories of those who have moved both across borders and within their own countries in response to climate change. 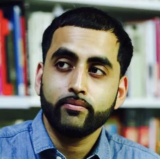 Murtaza Hussain is a national security report for The Intercept, based in New York City. He has reported in the past from Turkey, Jordan, France, Egypt, Bosnia and across the United States. His work focuses on national security, non-state violence, international relations and intellectual history.

Murtaza Hussain plans to report on political movements in the Balkans which are currently challenging the status quo that has existed in the region since the breakup of Yugoslavia. His reporting will seek to explain the continued popular protests across Bosnia and Herzegovina, Serbia, and Croatia, as well as the unraveling postwar political order that threatens to reignite armed conflict in the region. 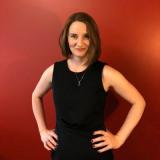 Amy Mackinnon is a reporter with Foreign Policy. Originally from Scotland, she has reported from across Eastern Europe and was based in Moscow as senior editor for the crisis-reporting site Coda Story. Mackinnon was a 2018 recipient of the Alfred I. duPont-Columbia award for her reporting work on the Reveal radio documentary "Russia's New Scapegoats." Her work has been published and broadcast by Coda Story, BBC Radio Scotland, Slate, Vice and CNN, among others. She speaks Russian and holds master's degrees from the University of Glasgow and the Newmark School of Journalism at CUNY.

Kenneth R. Rosen joined the staff of The New York Times in 2014 and is the author of two books of nonfiction publishing in 2020. He is a frequent contributor to WIRED. A finalist for the Livingston Award for international reporting, he won the Bayeux Calvados-Normandy Award for war correspondents and a Clarion Award for his reporting from Iraq.

He will spend his fellowship reporting on the policies of the United States and Europe to deal with foreign fighters that have participated in the Syrian conflict.

Neri Zilber is a journalist on Middle East politics and culture and an adjunct fellow of The Washington Institute for Near East Policy. He is a regular contributor to The Daily Beast, Foreign Policy, and Politico Magazine, and his work has also appeared in the New York Times, Washington Post, Guardian, The Atlantic, New Republic, and Foreign Affairs, among other outlets. He is the co-author of State with No Army, Army with No State: Evolution of the Palestinian Authority Security Forces 1994-2018, and the contributing author on Israel's social protest demonstrations for The Occupy Handbook, a chronicle of the global "Occupy" movement. Neri holds a bachelor's degree from the School of Foreign Service, Georgetown University and a master's degree from the Department of War Studies, King's College London.

Neri will use the fellowship to report on the European contribution to the training and advising of the Palestinina Authority's Security Forces, especially in light of the increasingly strained U.S.-Palestinian relationship. Is there a willingness and capability amongst European policymakers to fill the void left by America?

Applications for 2022 are now open!

Announcement
After another round of strong applications, we are excited to announce our selection for the 2018 cohort of Transatlantic Media Fellows.